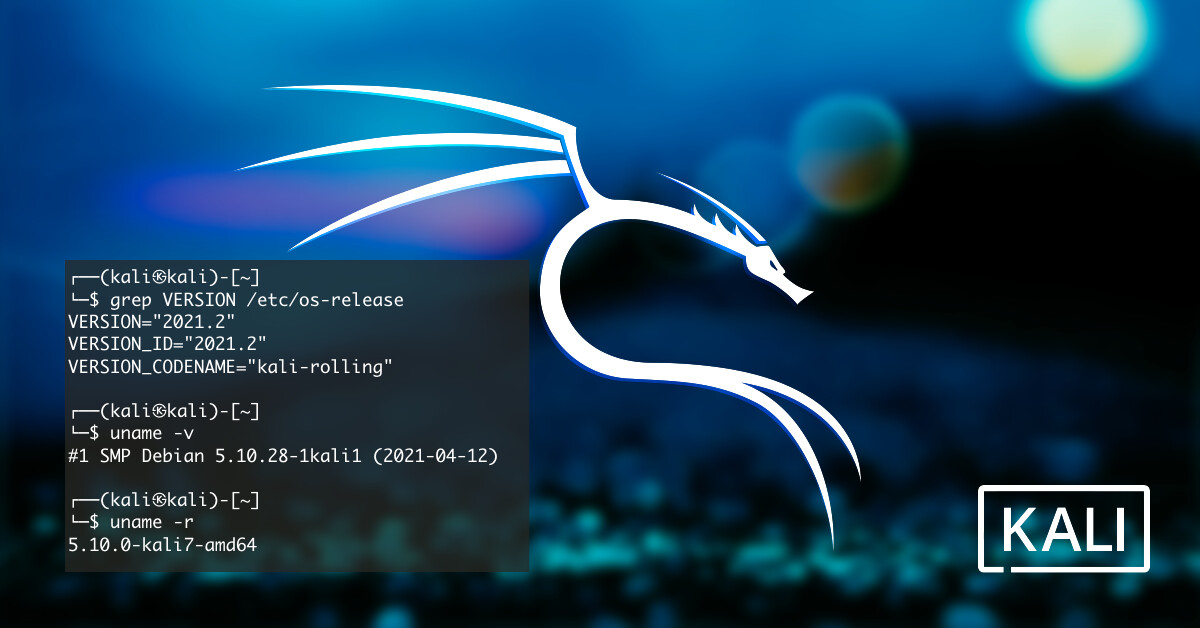 Say hello to Kali Linux 2021.2! This release welcomes a mixture of new items as well as enhancements of existing features, and is ready to be downloaded (from our updated page) or upgraded if you have an existing Kali Linux installation.

A quick summary of the changelog since the 2021.1 release from February 2021 is:

In case you missed it, we have previously covered Kaboxer in it’s own dedicated blog post, which goes into a lot more detail of why we love it so! For developers, this is a great new tool in the arsenal. Users will, hopefully, not realise that they are using it, only noticing that previously problematic tools now work correctly!

Without repeating what has already been posted, this technology allows us to correctly package up programs that were previously difficult, with items such as complex dependencies or legacy programs & libraries (such as Python 2 or dated SSL/TLS).

With Kaboxer’s launch, we have released 3 packages using it:

If you want to read more, please see either our blog post covering it, or our documentation around it.

Kaboxer is still in its infancy, so please be nice & patient with it.

Announcing Kali-Tweaks! This is our little helping hand for Kali users, with the idea to help customize Kali to your own personal taste quickly, simply, and the correct way. This should help you to stop doing repetitive tasks.

Currently Kali-Tweaks will help out with:

Our philosophy is to always understand what you are running, before you run it. That way, it reduces the chances of any undesirable nasty surprises. Which is why we will always encourage anyone to do actions manually before automating it, so you get to understand what is happening under the hood. On the flip side, we also understand there is so much to remember. Then when you sprinkle in people’s bad habits, which often have long term implications and end up breaking Kali, there is room for improvement. So, we started developing Kali-Tweaks. Where possible, Kali-Tweaks will also display what commands are being executed to help educate users.

We do want to mention a few things:

It is still early days with Kali-Tweaks, and we already have ideas of what to expand into, but we welcome any suggestions from you!

Kali-Tweaks is still in its infancy, so please be nice & patient with it.

Kali’s Bleeding-Edge branch has been around since March 2013, but we have recently completely restructured the backend.

For those not too familiar with Bleeding-Edge branch, here is a breakdown:

You may then end up skipping the Kali package and compiling your favorite tool’s source-code. This might then conflict with Kali’s packaging, and it is your responsibility to maintain the program. This is where bleeding-edge branch comes in.

Since moving over to GitLab, we have been able to create Kali-Bot to help with heavy lifting and automation

This is a fully automated procedure, as a result, the testing that goes into our packaging is automated as well (unlike anything that is in kali-rolling branch which has manual testing involved). If there has not been a unit test created, its not going to be tested for. This means there is a chance packages will be broken, and more trust goes into the tool author having correctly developed the tool.

If you want to give it a try, have a look at our kali-bleeding-edge documentation to learn how to enable the repository and how to tell apt to select a package from this repository. Once the repository has been enabled, it looks like this:

Not every tool has made it to the new system yet as there are still many limitations to overcome, but to see what is supported and also how many:

The numbers will only grow bigger and better as time goes on, with less bugs in the code and more unit tests in place!

If you are a tool author and want to get your software on the list, please chat to us, and we can show how to enable webhooks!

We have patched our kernel to remove the restriction of requiring privilege permission in order to use TCP & UDP ports under 1024 (meaning 0/TCP-UDP <= 1023/TCP-UDP). This was done because:

Now, this change won’t appear in all instances as some flavors of Kali operate without our kernel. This depends on which platform you use (such as Cloud instances, Docker or WSL). If you are on a platform that does not use our customized Kernel, this change will not be applied. For example, the top one uses Kali’s kernel on a bare metal install, and below uses Kali in a docker container, so its using the host’s kernel:

It would not be a Kali release if there were not any new tools added! A quick run down of what’s been added (to Kali’s archive and network repositories):

Ghidra and VSCode have been included into the kali-linux-large metapackage, so they are included on the installer image for people doing a fresh install. Otherwise you will need to upgrade Kali (if you already have the kali-linux-large install) or manually install them (if you want them!):

A few notes about code-oss (aka VSCode):

If you are using ZSH, with the latest Kali profile applied, you can toggle between the two-line prompt and one-line prompt by pressing: CTRL + p (at the same time). This will only have an effect for the current session. If you would like to set it permanently, see kali-tweaks.

We have switched up the quick launch tray in the top left, by:

To give you an idea of how the toggling between the terminal user works:

Inside of Thunar (Xfce’s default file manager), if you right-click in the main window, you should have a new option, Open as Root:

With these theme changes, you may not get them if you upgrade Kali. This is because the theme settings are copied to your home folder when your user is first created. When you upgrade Kali, it is upgrading the operating system, so upgrading does not alter personal files (just system files). As a result, in order to get these theme tweaks, you need to either:

People who have upgraded, you may have spotted that there is a new default login wallpaper and desktop background, but there are extras as well in this release:

Plenty of improvements under the hood, including:

There are even more improvements to Kali, that are outside of the above text. Below are other note-worthy items:

Fresh Images: So what are you waiting for? Start grabbing Kali already!

Seasoned Kali Linux users are already aware of this, but for the ones who are not, we do also produce weekly builds that you can use as well. If you cannot wait for our next release and you want the latest packages (or bug fixes) when you download the image, you can just use the weekly image instead.

This way you’ll have fewer updates to do.

Just know that these are automated builds that we do not QA like we do our standard release images. But we gladly take bug reports about those images because we want any issues to be fixed before our next release!