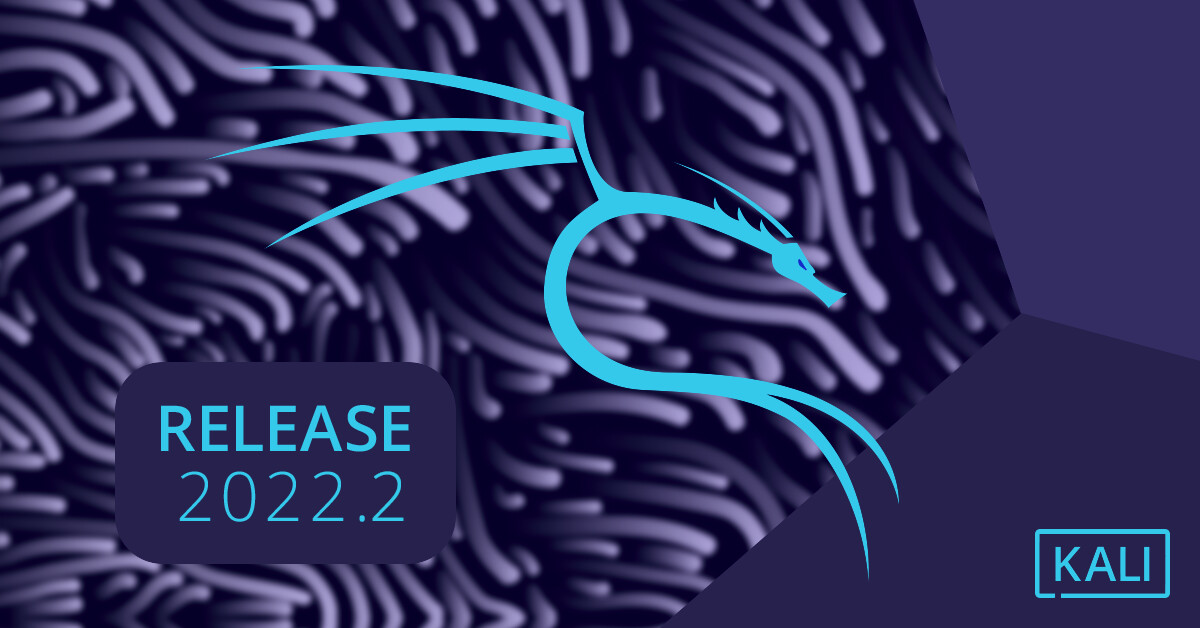 It’s that time of year again, time for another Kali Linux release! Quarter #2 - Kali Linux 2022.2. This release has various impressive updates, all of which are ready for immediate download or updating.

Like for every (almost) half-year, there is a new version bump for the GNOME desktop environment. Kali 2022.2 brings the new version, GNOME 42, which is a more polished experienced following the work previously introduced in versions 40 and 41.

The shell theme now includes a more modern look, removing the arrows from the pop-up menus and using more rounded edges. In addition, we’ve upgraded and tweaked the dash-to-dock extension, making it integrate better with the new look and fixing some bugs.

Here is a preview of the upgraded Kali themes for gnome-shell:

With GNOME 42, there is one new feature that is brighter than all of the others: the screenshot and screen-recording tool. It’s an enormous improvement in terms of user experience. Screenshots are, at the same time, saved to the ~/Pictures/Screenshots/ folder and copied to the clipboard, so the user does not need to find them.

Quick shortcuts to skip the On Screen Display (OSD) dialog:

This new Plasma release focuses on smoothing out wrinkles, evolving the design, and improving the overall feel and usability of the environment:

This modification also removes the CPU graph widget, not only due to the horizontal space it required, but also because it had a performance hit in low spec ARM devices.

It has been some time since the last update of the kali menu. This time the icons for nmap, ffuf, and edb-debugger were improved and updated, and new ones were added for evil-winrm and bloodhound.

Another improvement for the app dashboard is that the programs that include a user interface will now respect the custom icon provided by Kali. Previously, the icon in the app drawer showed the proper image, but once you launched it, the icon hardcoded to the program took preference, usually using a lower quality and pixelated image. This change will only affect KDE and GNOME desktops and, unfortunately, does not work on Xfce. Thankfully, this issue was more noticeable in these desktops, as icons in Xfce’s panel are tiny.

Generally, configuration files in Kali are stored outside of the $HOME directory, but some programs do not support this. As a workaround, some config-files need to be copied to the user’s home directory when it gets created.

This method has two issues:

With this change, the system will automatically copy any file from /etc/skel found missing in your home folder without replacing the already existing ones (do not worry, your changes will not get overwritten). So if, for example, you remove the Zsh shell configuration file, ~/.zshrc, the next time you log in, the file will be replaced.

Tweaks for the Terminal

Last year for April Fools Day we did our “Kali 4 Kids” joke, which a scarily large number of people took VERY seriously. The number of organizations that contacted us wanting access to Kali 4 Kids was crazy.

This year, instead of celebrating with a joke, we wanted to give everyone something fun.

We have all seen Kali show up in movies and TV shows (like Mr. Robot) over the years. Hacking as shown in popular media, has ranged from really fun to completely absurd, so we saw the opportunity to do a tribute to some of our favourite instances (and get a little nostalgic).

Even though this project was designed for 1st April it still works as an awesome screensaver. For this reason, we thought it would be a good idea to keep it in our repository so you can install it whenever you want:

You can also install the hollywood-activate command to be able to launch it immediately from the terminal and avoid waiting for the screensaver to launch:

If you want this on macOS or Windows, download the video file, and then use something like:

Last March we introduced the official support for BTRFS snapshotting in Kali Linux. We call it Kali Unkaputtbar! Sounds great, doesn’t it!

Have you ever wished you could travel back in time after deleting that important customer report or after installing a broken driver (Nvidia?) just before heading into a board meeting? Well, you’d better read on, because now you can!

For more information, here you have all the documentation for BTRFS Installation.

Preview of Kali Unkaputtbar in action, showing all the previous snapshots you can choose from the boot menu.

It would not be a Kali release if there were not any new tools added! A quick run down of what has been added (to the network repositories):

We want Kali to be able to access and interact with as many different services as possible. We all know that databases often contain juicy information. And MongoDB is no exception. The client has been restored & fixed up. Sorry for the down time!

There have been numerous packages updates as well.

The legendary @yesimxev has added a new WPS Attacks tab to the Kali NetHunter app, which utilizes OneShot to perform various WPS attacks without monitor mode from your internal wireless chip, even from your Kali NetHunter watch!

The TicWatch Pro 3 GPS, LTE, Ultra GPS, Ultra LTEare receiving initial NetHunter support. It features the same functionalities as the TicWatch Pro, except BadUSB. We are Trying Harder to bring you even more for the next release on this watch! In the meantime, all TicWatch Pros are now supported - TicWatch Pro, Pro 2020, Pro 4G/LTE.

Head over to our documentation site for a step-by-step guide on how to install Kali NetHunter on your TicWatch Pro 3 device.

We would also like to give a community shout-out to Syndrowm, who improved wpa_supplicant.conf handling on Raspberry Pi devices - thank you!

We’ve pushed a couple of changes to the Kali-Docs during this time as well. One new page that we think Apple silicon users will enjoy, and a sizeable change to another page that will interest any users wishing to access a “Desktop” (aka Graphical User Interface - GUI) from a normally strictly headless instance.

Seasoned Kali Linux users are already aware of this, but for the ones who are not, we do also produce weekly builds that you can use as well. If you cannot wait for our next release and you want the latest packages (or bug fixes) when you download the image, you can just use the weekly image instead. This way you will have fewer updates to do.

Just know that these are automated builds that we do not QA like we do our standard release images. But we gladly take bug reports about those images because we want any issues to be fixed before our next release!

As always, should you come across any bugs in Kali, please submit a report on our bug tracker. We will never be able to fix what we do not know is broken! And Twitter is not a Bug Tracker!

Want to keep in up-to-date easier? We have a RSS feeds & newsletter of our blog!