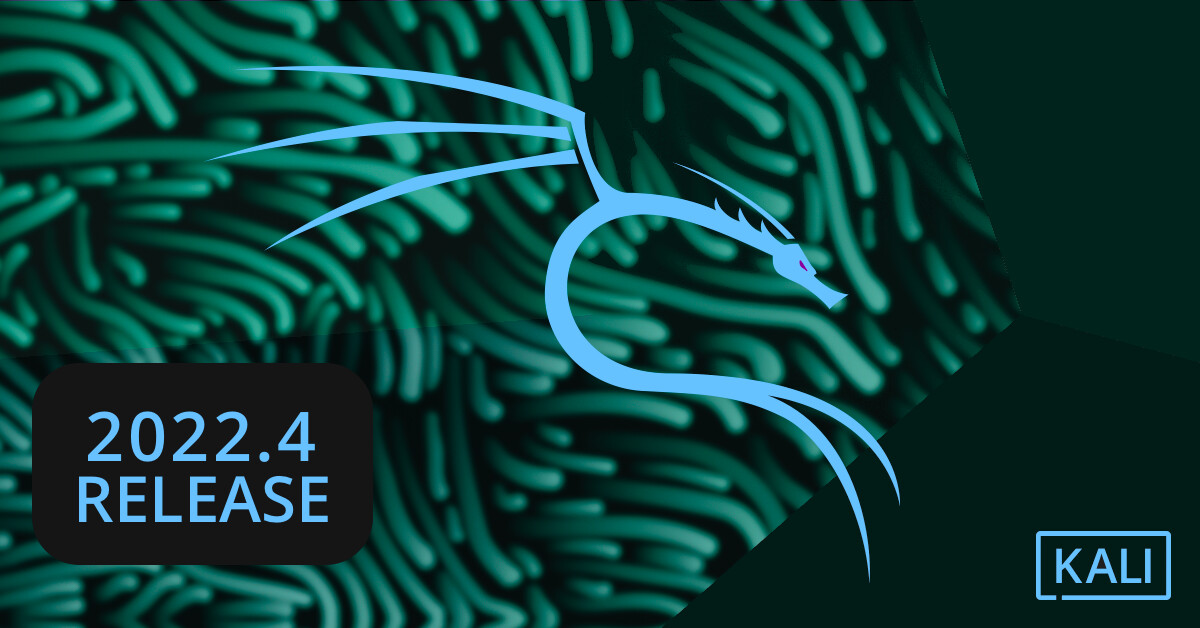 Before the year is over, we thought it was best to get the final 2022 release out. Today we are publishing Kali Linux 2022.4. This is ready for immediate download or updating existing installations.

A summary of the changelog since August’s 2022.3 release:

Its been a long time coming, but we are very happy to announce that Kali has been added to Microsoft Azure (again - and this time to stay)! Following in the foot steps of our Amazon AWS image, we are using the same kali-cloud build-scripts now to automate publishing to Microsoft Azure store.

Out of the box, currently, there is no graphical user interface, or any tools pre-installed. Should you want the default toolset (kali-linux-default) or any other combination of metapackages, it should be like any other Kali platform. For installing a desktop environment, we have the following kali-docs page: Setting up RDP with Xfce

We hope in 2023 we can revisit this again and are looking at doing ARM64 architecture, as well as different variations of images, allowing you to choose from a mixture of headless bare-bones install, the traditional environment, and a mixture of everything in-between.

We are now including a QEMU image with our pre-generated images. We hope this makes it easier for the people who use self-hosted Proxmox Virtual Environments (VE), virt-manager, or libvirt!

On that subject, elrey (alex) from the community has added libvirt support to our kali-vagrant build-script.

In Kali 2022.3, we have produced a Generic Cloud image. The idea of this image is that it should work in “most” cloud providers This is coming from our kali-cloud build-scripts. So if you are self-hosting OpenStack, this is a great way of getting Kali loaded up!

We have expanded the social networks which we post on, as well as refreshing the current ones. As a recap:

As a reminder, we don’t use social networks for technical support - you can receive community support via discord or our forums and bug reports should go to the bug tracker! Instead, we automatically post blog posts thus these accounts are mostly unmonitored!

If social networks are not your thing, you can also keep in touch via:

We have also taken the time to create a Press Pack (aka Press kit) for Kali. Here you can find all our product media resources to use, including:

Please bear in mind that they are under copyright & trademark when using them!

You can download them all, or you can view them online.

And on the subject, we do have a page for Press and Media enquiries.

We are very excited to announce the official support of the Pine64 PinePhone and PinePhone Pro thanks to the amazing work of Shubham Vishwakarma and the vibrant community.

The launch of Kali NetHunter Pro is the beginning of a new chapter for Kali Linux and NetHunter, a bare metal installation of Kali Linux with Phosh desktop environment, optimized for mobile devices.

First of all we make available SD card images for the PinePhone and the PinePhone Pro to dual boot alongside the main OS. Soon we will release alternative versions with Plasma Mobile as well as installers so you can install Kali NetHunter Pro onto the internal flash memory.

Please help us with the development by testing the images, submitting bugs and improvements in our GitLab repository, and become a part of the vibrant Kali NetHunter community.

Internal Bluetooth support has finally arrived, thanks to @yesimxev and the awesome community! We have added support to some devices already, however as each kernel needs new Bluetooth drivers enabled, it takes time to rebuild each of them. You are more than welcome to contribute if your device is Kali NetHunter supported already without the new drivers.

@yesimxev has released the ultimate Kali NetHunter Complete Kernel Porting Guide. Have you ever dreamt of porting Kali NetHunter to your device but didn’t know where to start? This video has it all so get cracking.

Wardriving has been updated with bugfixes, Bluetooth, RTL-SDR, and MouseJack support. That’s good news for QCACLD-3.0 users (most devices out there) as you will be able to use wardriving with internal wireless and Bluetooth chipsets, if OTG adapters are not an option.

KeX also received the status fix along with audio support. Now you can play any audio in KeX session.

Wireless firmware has been updated, and Magisk firmware flashing is now patched.

Android 11/12 crashing when starting the Kali NetHunter app has also been fixed with this release.

Last but not least, let’s welcome the OnePlus 6t, Pixel 4a 5g and Realme 5 Pro devices to the list of the Android 12 supported devices.

Both the GNOME and KDE Plasma desktops have received a major version bump.

For people who opt to use GNOME as their desktop environment, GNOME 43 is now in Kali! If you do not read their changelog, below is a quick summary mixed with some of our tweaks:

Kali now includes the new version 5.26 of KDE, which improves the overall desktop experience, and brings tweaks for multiple widgets. You can learn more about the latest changes in the Plasma 5.26 release announcement publication.

It would not be a Kali release if there were not any new tools added! A quick run down of what has been added (to the network repositories):

This is new tools, there are numerous updates to existing tools.

We are happy to say that Kali has been added to Raspberry Pi Imager (rpi-imager), making it even easier to flash Kali to your SDs (as long as you can buy an RPi!). We have also written up a quick guide on it.

The Kali user’s sudoers edit is now its own file in /etc/sudoers.d and users should no longer be prompted on what to do when an update for sudo comes in. This change does not occur on an upgrade, only fresh installs.

The USBArmory MKII has had the u-boot bootloader bumped to 2022.10.

The build-script for the ODROID-C2 has been fixed and should now properly create images again. Thanks to M Beekhuizen for reporting the issue.

Radxa Zero images created from the build-scripts should now have firmware to support the wireless card on newer models (1.51+). Thanks to Stefan Lehner (from Discord) for reporting the issue.

Pinebook Pro images have firmware to support the new wireless card on more recent models. Thanks to Jonathan Cox for reporting the issue.

The kali-arm build-scripts got a big makeover, thanks to Arszilla for putting in the work to do this.

Our kali-docs has had various updates to existing pages as well as the following new pages:

Thank you for their work!

Recapping our blog posts since the last release:

There have been various contributions since our release. Thank you guys! Out of these, a few people’s actions have helped make a significant improvement to Kali, so giving them credit:

Please note, we will not be recording these sessions. These are live sessions only.

Fresh Images: So what are you waiting for? Go get Kali already!

Seasoned Kali Linux users are already aware of this, but for the ones who are not, we do also produce weekly builds that you can use as well. If you cannot wait for our next release and you want the latest packages (or bug fixes) when you download the image, you can just use the weekly image instead. This way you will have fewer updates to do. Just know that these are automated builds that we do not QA like we do our standard release images. But we gladly take bug reports about those images because we want any issues to be fixed before our next release!

As always, should you come across any bugs in Kali, please submit a report on our bug tracker. We will never be able to fix what we do not know is broken!